This year our annual band awards were presented at the patron’s concert and the winners were as follows:

1. Junior Bandsperson of the year. Leo Stemp. This was especially good as Leo, not for the first time either, had, in the morning, played a solo in the Junior Band’s monthly Concert at Central Methodist Church. What a great tone he has, too.

2. Senior Bandsperson of the year. Max Bridge. Max is a quiet lad, very understated in character, yet a great char- acter within the band, and he’s not a bad tenor horn player, either, sitting there week by week, just putting in the right notes.

3. The Low Brass Award. Ryan Bolton. Fast becoming a pillar of the band.

4. The Sheila Wright Trophy for a person who has stood out in their endeavour to serve the band. Alfie Ryder. A word about Alfie. Just over two years ago, he was playing second cornet. He was asked to move onto another instrument, as it suited the needs of the band, so he did move. not one up, or one below, but right down into the basement, and onto the biggest instrument in the band, the B flat bass! Now this is a massive leap, and if you don’t understand this, then try it for yourself. Having a good tone is the target for all musical instrument playing, especially in brass playing where more than one factor influences the tone, and this move of Alfie’s required a whole new approach. There is a lot of resistance when you blow into a cornet, so your breaths last longer.

When you move to a larger instrument, that resistance lessens, and so you have to draw more breath. Also, because of the size of a B flat bass, the matter of pitching the note becomes a bigger issue, because the breath has to be controlled carefully, with no resistance to it, and if not done correctly, the note will be out of tune, and that matters just as much in the basement as it does at the top of the band. So how has Alfie done? I’ll tell you how he’s done. Very well. For a start, he’s still there so what does that tell you without words? He has fit into the bass section well, as part of the team, and down there it’s all teamwork, especially with breathing. He backs up the other two B flat basses. George Hanson and Chris Carter, and those two are a real pairing. Also supporting the E flat basses too, ie Beth and Sam, so all in all, and without many words, he’s just got stuck into it. Thanks Alfie, and it’s not often I compliment another bass player, but I have to take off my hat to him. 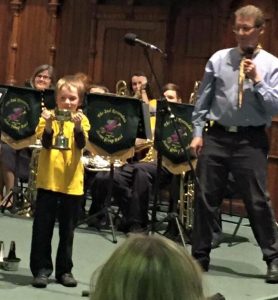 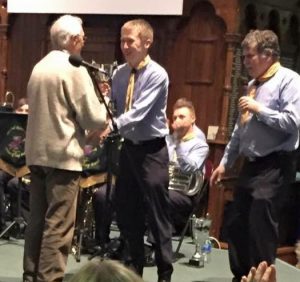