A NEW venue this year with us going to St Mary’s Church in Rawtenstall but it didn’t affect the attendance – another full house for our Thank You concert for patrons who have supported us over the year.
This year we were delighted to welcome guest soloist, violinist Tom Bangbala from the BBC Philharmonic Orchestra who was accompanied by his pianist wife Alison.

We now have over 200 patrons and this year your annual membership subs and donations have provided us with well over £3000. A really big thank you for that. As for the concert – well Hilda was there assiduously taking notes and here is the verdict.

This was a departure from the norm of brass band concerts and certainly, for me, a first! After the obligatory housekeeping announcements, the band started up with ‘When Thunder Calls’ – always an impressive opener, where the band walks on, section by section, to a drum beating. This lends itself to the acoustics presented in that venue. Next we had the band’s principal cornetist, James Turner, to play ‘Buster Strikes Back’. James has taken on this heavy mantle of leading the band in a great way, he is very talented and becoming a fine player with a beautiful cornet tone, a real credit to the band, his family and himself!

Next up were our our two euphonium players, Tom Kershaw and Ryan Bolton, to play ‘Softly As I Leave You’, an old Matt Monro favourite. This was made famous in the brass band world by the Childs brothers Bob and Nick, whose names are synonymous with musical excellence! Next, the band played ‘Ave Maria’, and that was very moving, for the reasons given in my last blog.

Now we have our excursion into the unknown for our band, a soloist on violin! Tom Bangbala is very well known in the orchestral world, and I’m going to leave it at that. He played music by Bach and Kreustler, hope that is spelt right? He was accompanied by his wife on piano, she also is an accomplished musician, a double blessing for us? Yes. The first half was then rounded off by the emotive ‘Flanders Fields’, a commission by our band to celebrate the centenary of the outbreak of the First World War. This piece has narrative and graphic visual accompaniment and is massively evocative!

The second half started with Steve Burgess and the Junior band, playing three short pieces, ‘Cat Came Back’, ‘Clementi Sonata’ and ‘Joshua Fit the Battle of Jericho’. Steve B. is not one to hog the limelight, but what he has done with this band, and what he continues to do with this band is remarkable! So I did remark on it! The unseen benefits of his labour are a ready source of new talent to feed upwards into the senior band, and the opening up of places for those in the training band to move on up, a veritable conveyor belt of talent! Thanks Steve for all your hard work. Then came our guest soloist, this time with music from Bach and Manuel De Falla, respectively, ‘a Partita’ and then ‘Andalucía’. Tom is not only a great musician, but a staunch advocate of classical music, especially Bach’s, which he claims cannot be surpassed. No argument there, then. His son Joseph plays trombone in both senior and junior bands, so that speaks for itself, res ipsa loquitur. Tom’s final offering was the ‘Theme from Schindler’s List’, an allusion to WW2. This is a very haunting melody, and is such that some people, including me, wondered how it would meld with the brass band sound. As it happens, the brass accompaniment was very sympathetic to the strings of his violin, over 300 years old his instrument on the night, you don’t get many of those!

The band then played ‘Keep Smiling’ Through, a medley of second world wars tunes, and this had the audience tapping and clapping along to the beat. A word to describe the audience? Captivated, well, they were nearly all patrons so they would be yes? The encore was the ‘Hokey Cokey’, starting off with a few bars of Rossini’s ‘William Tell’, then doing a musical shape shift, with different sections of the band featured, again starting with the heavy end and working upwards to finish on the cornets and soprano. They loved it! This piece, though, is best played out in an arena of some sort, where the sections move one by one into the middle to perform. Who can ever forget those magnificent trombone shenanigans, glad-handing and high fiving on their part? What a performance! Again, a fabulous concert, with a lot of feedback from the audience. Hilda’s Highlights? I liked all the music, and in a venue like this, it came over very well. Again, long may it continue. 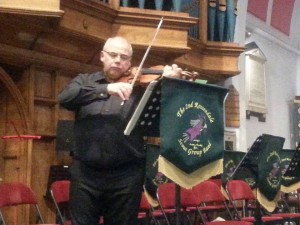 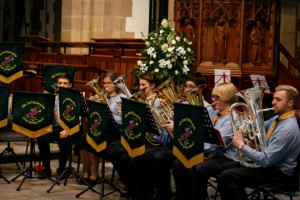 A strong finish to the term for the scout section. The last few weeks have been lots of fun. Hikes, field games, skiing, delicious pizza and roasting marshmallows on the fire. We got to invest new scouts, name the new patrol leaders and award badges. Thanks to all the leaders and people who've supported the scout section over the course of the year. Proud of all the scouts, especially the newer members who moved up recently. Also best of luck to all the scouts who moved onto new ventures this year.

Have a great summer everyone.
Stay safe

On behalf of all three of our Scout sections.💯..would just like to give you a quick update .🗯...Tomorrow is the final meeting for us all after a very weird year...where thanks👏 to the Leaders no one missed out.:)
Tomorrow......The Beavers will be at The Rec...crazy games and investing the new Beavers.🤸‍♂️🤸‍♀️..great to see so many new faces.👍
The Cubs will be doing the Bacup trail..🚶‍♂️🚶‍♀️..And all being well ,a Cub Camp in August.⛺
The Scouts will be at the Bradley's...Pizza and treat night ..🍕🍕🍕🍕....I think something being planned in the holidays for them.🤫
Y.Ls welcome to The Bradley's.🥰 We cant thank them enough for the use of their land.💥
Hopefully the news from September will mean all three sections will be back in H.Q.
Have a great safe six weeks and thank you from US all for all your support.👌
Janet H. AGSL. ... See MoreSee Less

Scout section at The Hill (Rossendale Ski Slope). Little wet, some great skiing by the scouts and hopefully lots of fun.
Thanks to all the scouts for attending and adults for helping. ... See MoreSee Less

Very proud of the scout section tonight who completed a 3 1/2 mile hike up above Newchurch. They got round in a timely fashion taking turns leading the way on the route. As always thanks to all the leaders and to the scouts for attending. Great evening very enjoyable. ... See MoreSee Less