After many, many years sitting on the back row with his beloved Bass, Dave Walsh has finally called time on his playing career with the band.

The example he has set and the support he has provided for the band as a whole, and other younger bass players in particular, has been out- standing and the fact that we still have a full complement of players for the back row is in no small part down to Dave and the nurturing he has provided over the years.

Dave has penned his own thoughts about retiring from playing and they are as follows.

Well, that was the week that was – TW3! I completed over 14 years of service to the band on Christmas Day 2014 and I have enjoyed every minute of it. I have played alongside some of the most talented of people and I have benefited greatly from that. No names, no pack drill but it has been brilliant.

When I joined the band, we were playing fairly simple music, upgraded by some Rodney Newton works, which did set the standard that little bit higher and now we play some quite difficult music, which takes some getting into. This says a great deal about Graham our conductor, as well as the determination of the players. We played at Windsor Castle twice and I went on tour three times with numerous short trips to Bocholt in Germany. We have had a lot of highs in that time and sadly a few lows when we have lost people that we loved dearly and who were an integral part of the band, but as life goes on, these sad times will be overtaken. I have no doubt at all that the band is set to improve further.

We have an excellent musical director in Graham Helm and his back-up associate conductor Phil McAuley. We have a great band manager in Mike Warwick who deals with all non- musical matters and gets the band organised, getting up to all the concerts and other things we do and takes care of more stuff behind the scenes than we could ever know about. Our band is unique and self-sustaining drawing on local talent mainly, but with a few imports from neighbouring towns such as me from Burnley, with two family members. I am looking forward to seeing the band go from strength-to-strength with new look sections as people come through the ranks from the Training and Junior Bands. The work done by Steve Burgess, Josh Brown and Jenni Davies in these areas cannot be measured and all of them are committed heavily to Senior Band as well.

So thank you guys, I am more than confident in the future of this great and unique band. It has only one failure and that is we don’t shout loudly enough about what we accomplish here in Bacup. It was the right time for my to decide to retire as I have struggled to maintain my own playing standards, which has been absolutely vital for me to be able to bark at my fellow bass players. And I have barked, they will confirm that. I intend to be fully involved with the behind the scenes work and I will always encourage players to aspire to higher standards. They can do it if they try, and practice will make perfect. So thanks everyone and just keep going – onwards and upwards! 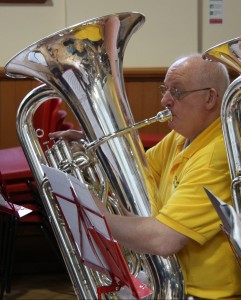