Skip to content
A WEEK after the Weavers concert we were in Blackburn at the beautifully restored Cathedral for another joint concert in aid of a very deserving cause – Rossendale Hospice. This concert was organised by Bacup born tenor Sean Ruane and his Chant productions team.
As well as being an internationally acclaimed star in his own right Sean specialises in working with local school and youth choirs. The culmination of this is a public concert. This particular event featured lots of school choirs from the Rossendale Valley together with Sean and our band. A large and magnificent venue for a concert of this kind and when it is full, as it was for this concert, the atmosphere is magical. A really good experience for the choirs, most of whom would never have performed before in such a setting and in front of such a large audience. It was the second year that we have been involved in this Hearts and Voices event and again it was a win-win situation for everyone involved, with the Hospice benefiting from the large four figure sum raised. Another one in 2017? 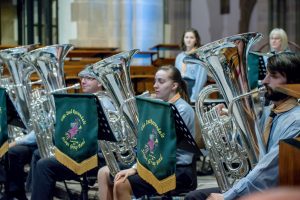 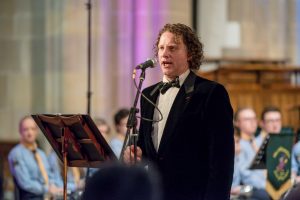