Beavers are girls and boys aged 6 to 8 years old who form a Colony. Our Beaver Colony meets every Tuesday at the Scout HQ, 6:00-7:00pm 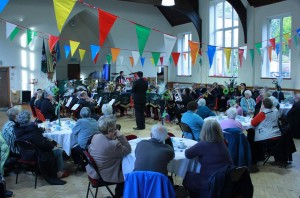 We are the 2nd Rossendale Scout Group based in Bacup, Lancashire, a small former mill town on the edge of the Pennine Hills midway between Rochdale and Burnley in an area that forms part of the Rossendale Valley

The Scout Group was formed in Bacup in 1910, only 3 years after the scouting movement was first started by Robert Baden-Powell in 1907.

Historically, the locality has always been a traditional brass band stronghold from as early as the middle of the 19th century. The original Bacup Old Band was reconstituted to great effect in 1859 as the 4th Lancashire Rifle Volunteers and won the coveted British Open title on three occasions between 1864 and 1869.

The famous Irwell Springs Band followed in the footsteps of the Bacup Old Band and was a highly successful contesting brass band.

The 2nd Rossendale Scout Band was formed in 1963. Originally formed as a drum and trumpet band the instrumentation was changed some seven years later and substantial progress has been made in conventional brass band terms. The later inclusion of girls enhanced the development and presently they make up almost a third of the membership. Ever-present in the success of the Scout Band is long serving Group Scout Leader Michael Warwick who has throughout overseen the development of the range of activities undertaken by the various sections of the Group.

The senior band performs regularly across the North of England and in recent times has performed with the Black Dyke, Fodens, Grimethorpe Colliery, Brighouse and Rastrick Bands and most recently with The International Staff Band of The Salvation Army. They have appeared at Windsor Castle for HM Queen Elizabeth and at many fine concert venues including The Bridgewater Hall, The Royal Northern College of Music, The O2 Arena, and Cologne Cathedral.

In 2010 our Scout Headquarters underwent substantial refurbishment, costing around £250,000. This has brought out building up to date and means we can continue providing music lessons and music making opportunities for young people.

Finance is generated with the generous support of local people and the band operates a successful Patron’s Scheme which greatly assists in generating the necessary revenue to support the work with children and young people in Bacup.

Tonight's scout section meeting. Camp fire above Weir. Marshmallows on the fire and believe it or not we got them singing. Good night with the best weather for it. We finished the evening by awarding badges to the scouts for their recent hard work. ... See MoreSee Less

Please support 2nd Rossendale Scout Group/Band on #easyfundraising, you'll raise FREE donations for us with your everyday shopping. Plus, register before the end of the month and we could win an extra £200 donation! Sign up now: www.easyfundraising.org.uk/support-a-good-cause/step-1/?invite=VVCFFA&char=24348&referral-campaig... ... See MoreSee Less

A week ago the scout section set off on their first camp in a few years. They spent two nights at the Ashworth Valley Scout Campsite. They were kept very busy by the leaders. Great to see them back on camp. They performed really well on the mock incident hike. Well done to all the scouts. A big thank you to all the leaders and helpers who made the camp possible. Mikey ... See MoreSee Less